They started the antibodies at about midday on Monday. So far Isita is tolerating the treatment much better than we feared. She has had some stomach cramps and a bit more diarrhoea than usual. She’s having extra fluids and will get a blood transfusion as she is a bit pale. But crucially she is not suffering the acute neuropathic pain that is one of the worst side- effects. They are keeping a very close eye on her, both clinically and crunching the numbers. Pray God nothing more complicated comes up.

Isita will start immunotherapy this morning. We came back to GOSH last night. She hasn’t got a cold any more and the doctor who examined her on admission said the results of the blood tests they took on Friday were fine. The pain team came in early this morning and fixed her up to a pain pump. Right now it is only running on fluids but they will give her a bolus of morphine as soon as the immunotherapy starts. We can’t help being a little nervous about the start of such important treatment and, of course, about the likelihood that it will cause Isita pain.

Our three weeks at home have been amazing, despite a build up of nervous tension about the treatment. Marta and I are paradoxically relieved that they are over. We need to move on, not least because in a fortnight we’ll be back home again for another three weeks, and as this treatment goes on the more time Isita will spend at home and the easier it will be.

Marta is very tired and I think the weight of expectation about the immunotherapy is part of that. I have had a lot of work and have tried to use it as a distraction or escape from worry. Jamie too has been a bundle of nervous energy, thrilled to have Isita back at home, at times incredibly tender and very, very sad to see her go back to hospital but also jealous, territorial and sometimes just as rough and rebellious as any seven-year old boy can be. I think he can hardly know or recognise what is going on inside his own head or his heart or gut these days. He is being pulled in so many different directions. And Isita herself is demanding, still used to being to total centre of attention not just of her parents but of a whole world of doctors and nurses  who only come into her life to focus on her. We are trying gently to bring her back into a more normal world.

Isita’s sixth birthday on Friday was sweet but very low key. We were only ever going to invite a tiny number of her friends, as she had to stay infection-free as much as possible in advance of this first session, but most of them had colds. So it was just Emily and that was perfect. Isita made her cake with Marta and then she and I iced and decorated it. She even ate a decent amount of it and is very proud of the fact that she was “absolutely fine”. In fact, I don’t think she was sick all week. 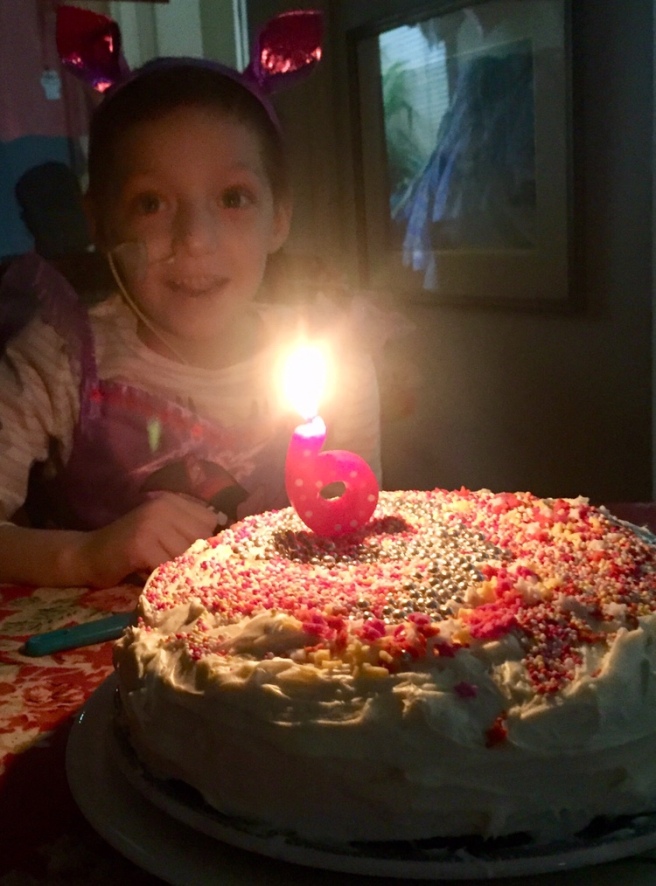 Later in the day she had a massive tantrum which Emily graciously ignored, even when Isita furiously stomped upstairs. We saw the results when we took the children upstairs to bed. It looked as if a bomb had gone off in her room. The truth is it doesn’t take much to make her room look like a bombsite. She has way, way, way too much stuff – the combined results of so many people’s generosity. There just isn’t place to put it and we are going to have to give a lot away. For the things that we cannot keep, we will find good homes back here at the hospital, in the outpatients departments, or wherever else they are needed.

We are looking forwards to being able to switch from receiving to giving mode. We have so many dear friends who are doing so much like the redoubtable Cristina, who is supporting GOSH, and who gave her most recent running medal to Isita. Marta and I continue to be astounded by this generosity. Isita’s godfather Rupert came on Sunday with Sara, their daughters Amelia (who has given up sugar for February and so far raised £2000 for GOSH) and Kitty, and their son, my godson Archie – a true soulmate and partner in crime for Jamie. He brought with him an envelope gathered from lots of friends intended to support our intended family trip to Eurodisney as it is absurdly expensive and once we are there we shouldn’t hold back. He said there is a card coming identifying who you are. Thank you all. We are extraordinarily touched and grateful. We are also doing very well. The most important thing now is to support the hospital and the neuroblastoma charity Solving Kids Cancer.

Yes. Isita has been sent home for another week. The doctors want her to be in perfect shape before we start the antibodies. Right now she still has a cough and cold, her haemoglobin is a bit low, and one of her liver function markers is a bit high maybe as a result of the cis-retinoic acid pills.

Although we are keen to get going with this treatment, any time at home is brilliant. And as the doctors pointed out, it means Isita will be at home on her birthday this Friday rather than in hospital, and probably in pain. We can’t have a big party though, we have to keep her infection free.

Isita’s fortnight at home ended in a bit of a scramble to get back to GOSH before the evening handover. Jamie’s half term has also ended, but he has an earache so he’ll be going to the surgery rather than school this morning. So we were a rather downbeat and grumpy family crammed into an overladen car crawling into London on the M40 late on Sunday afternoon. Isita and I came straight up to Giraffe ward and Marta went home with Jamie and the remainder of the luggage – all of us utterly exhausted.

Even if it was over-ambitious, and the logistics of getting there and back with all Isita’s medical equipment were crushing, it was a thrill to be back in Shropshire after so long. If only we could have spent longer there. Isita hadn’t seen our house there since Christmas 2016, and I only made three overnight trips last year. For a little bit it felt like old times.

During the fortnight at home, Isita has definitely grown stronger and rediscovered what life outside hospital is like. But as normal existence beckons, she is beginning to realise that it should be this way. At our kitchen table warmed by the iron stove, and hungry after running about in the garden, she was desperate to eat the mussels we were having for lunch and not at all keen on the boiled carrots we offered instead. For the first time she asked “Why did this have to happen to me?”

The return of appetite and actual hunger must be a positive sign that her gut is reactivating, but we have to be careful. The other night she ate a bowl of chicken broth and some pasta and then bounced on her bed, which made her copiously sick.

Assuming it is not postponed because of the slight cough and cold she is suffering from, Isita will start immunotherapy this morning. Over the next fortnight they will slowly drip a constant infusion of artificially adapted antibodies into her blood. These have been engineered or trained to recognise and kill neuroblastoma cells, as if they were viruses. The treatment is meant to mop up any remaining ‘microscopic’ disease lurking in her system, which is the main cause of relapse.

The problem is that some regular cells in the nerve endings share the protein flag that the antibodies use to identify neuroblastoma, so they get attacked too. This hurts, and in a small number of cases, causes permanent damage. This morning the nurses have just come in to set up a morphine pump by Isita’s bed in preparation for the start of the treatment. Let’s hope it goes OK.

Last week at home was heavenly, but exhausting. This week, unexpectedly still at home, is so much better. We are all getting over a bit of a cold, but are sleeping well, and regaining energy.

We thought Isita would start immunotherapy on Monday, but this has been postponed on the grounds that the delay won’t do any harm and the extra week of home life will do a lot of good. It’s true. Home life is so good for her. She’s doing better every day, eating a little and getting stronger.

She went to school a few days at the end of last week and loved it. Now it is half term. Isita and Jamie play and bicker. Sometimes he is jealous and eager to help Marta and me with our medical responsibilities, which are strict but no longer overwhelming, but for the most part he is sweetly protective.

We have to be careful not to drop our guard, and feel very grateful for all the careful training we received at GOSH. Last week’s cold caused a moment of tension as Isita’s temperature crept up to 37.8C before dropping back. At 38C, we have to take her to St Mary’s for intravenous antibiotics, in case there’s an infection in her line. That is what our training is meant to prevent.

On Friday we are all going up to Shropshire for a couple of days, something we haven’t done together since Christmas 2016. Then on Sunday evening it is back to GOSH, and Isita starts immunotherapy on Monday.

Exactly nine months after Isita was admitted to GOSH – she arrived in an ambulance from St Mary’s Paddington as her kidneys weren’t working properly – we have finally been allowed home. She last slept in her own bed 288 nights ago.

We are here for a week and then Isita will go back to GOSH for a fortnight of immunotherapy, then three weeks back here. And so on until July, but with less and less time in hospital.

As we are due back on Elephant Ward so soon, we shouldn’t really have felt that emotional about going. But of course we did. Various nurses and other friends like Em the physiotherapist dropped in throughout the morning to say goodbye. What a job they have done to get Isita this far and to make it possible for us all to be at home. It is a huge achievement. The dark days of the autumn are far behind us.

Here at home, Isita’s bedroom is full, full, full. An army of teddies is about to burst out and march down the corridor. She has a pirate’s trove of plastic jewellery overflowing from tin caskets (plastico buenisimo!), and a Barbie closet quantity of pyjamas. She hardly wore anything else all last year. We are due a rather terrifying clear-out – mañana.