Isita’s MIBG test has come back clear. There was some small uptake of the radioactive dye by the primary tumour, but no sign of cancer elsewhere. That small uptake indicates ‘treated disease’, so perhaps not entirely dead, but not active either. Our understanding (which still must be confirmed by the consultants and possibly further testing) is that it may continue to regress (the technical term is ‘involute’) without further therapy.

It isn’t quite job done, but four months and counting after high dose chemotherapy, this is unbelievably good, truly excellent news. We can’t say the cancer has gone, but for the first time this year we can dare to hope.

We don’t yet know what the next steps are. If Isita’s platelets stabilise, is there still an argument for carrying out surgery in case some of the tumour is still living? Perhaps. There may be other important treatments to stop the disease coming back from currently undetectable stem cells. High dose and the stem cell transplant should have eradicated much of that threat. But as I learned at the brilliant Solving Kids’ Cancer Neuroblastoma Parent Education Conference last weekend, it is a devil of a disease.

Dare we to hope? It is such great news, we should probably be rushing down the corridors screaming hallelujah. But we are not doing that yet, maybe because we have also learned today that there is very little chance of Isita being discharged before Christmas. It isn’t surprising as her gut is still painful and barely tolerating tiny feeds. While that is going on, we can’t relax. We have to keep going.

Next week they will carry out an endoscopy and colonoscopy with biopsies under general anaesthetic to investigate what’s happening with her insides. The fabulous news about the cancer means we probably have time to work it out, and time is what it needs.

She is well over the shingles though still a bit itchy. So as the days pass, we try to make things as fun as possible. As always, we’ve had a lot of help. The other day, Isita’s former nanny Michelle had a sleepover with her. Isita was in heaven. Michelle has given her a ukulele shaped like a skull.

This (the sleepover not the uke) helped me with my work which is full-on right now. An added bonus was that Marta and I could put Jamie to bed, and make him pancakes for breakfast. He has borne up so well this year, but he needs us more and more. The other day he was crying with the fear that Isita might never come home.

Then, a couple of days ago the wonderfully inspiring GOSH artist Matthew spent the whole morning making a beautiful painting with Isita alongside Andy from Cbeebies, who must have the most charismatic smile anywhere on TV, and who is equally charming in person. Basically he is the John Noakes of today.

Their creative endeavour is going to be broadcast on Friday 1 December – not sure what time. I’ll let you know. I have to say she was a natural, totally unphased by the camera. Dare I say it? She’s got a future, that one. 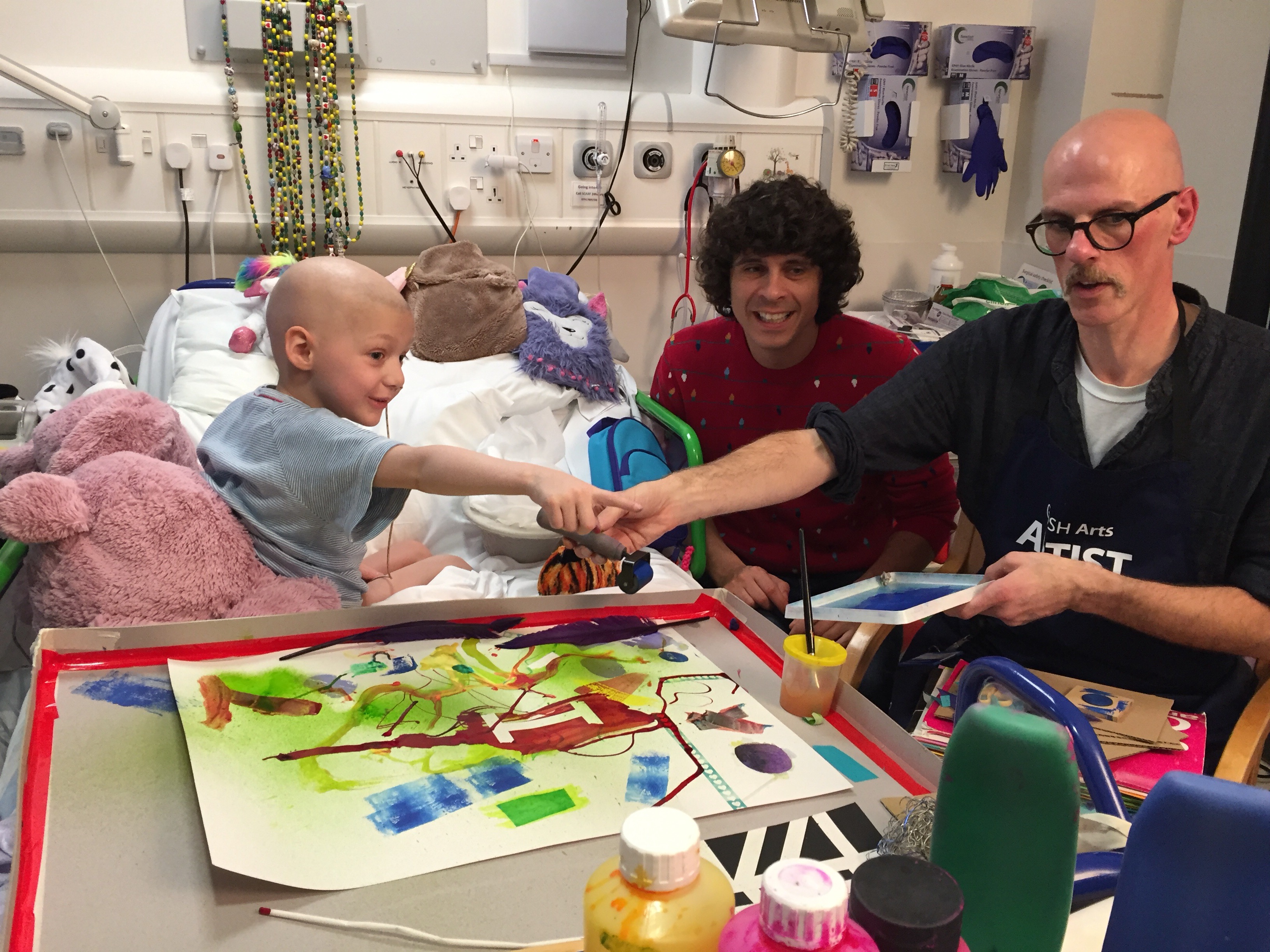